Here's a rundown of a few things I've added around Intraday Alerts:

There's now a page which works very similarly to the EOD Combo Scan. This one lets you combine multiple intraday alerts into a search. The most obvious combinations are to include one of the volume surge alerts with another alert. For example, stocks which bounced off their 50-day moving average and had a 2x volume pace. Note that the intraday alerts they'll still show even if the alert is no longer true. In the previous example, the volume pace could have slowed down and/or the moving average bounce could have later failed. 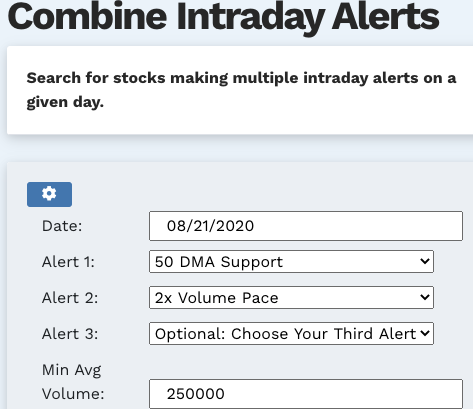 Intraday Alerts Now have their own Filter Parameters

Up until now, the intraday alerts used some of the default EOD Scan filters. Now they have their own set of filters. So you can now define a different stock "universe" for intraday separate from your EOD universe. This set of parameters is a bit more stripped down compared to the EOD parameters. For intraday you can only choose to filter by volume, price & date.

New Alerts for Above & Below the Previous Day's Range

There are two new alerts:


These can be useful if, like me, you enter positions based on a break of the previous day's range. In fact soon I'll be adding alerts which will tell you when some of SwingTradeBot's swing setups from thee previous day have triggered entries. For example, the 1,2,3 Pullback setup says you should only enter if the stock trades above the signal day's high. So you'll be able to easily see, in close to real time, which stocks have triggered their setups from the day before.

Note that the Combo search & setting of the filters are only available on the website for now. I hope to get some of this stuff into the mobile app soon. However, I have a pretty big stumbling block -- Apple won't let me update the iOS app until I include the ability for people to subscribe to SwingTradeBot via Apple's payment platform so they can take their outrageous 30% cut! That's not a trivial task. It means I've got to change a lot of my back-end code to be able to deal with Apple's systems. I've been avoiding that task for months but I'll likely tackle it soon.

Most likely I'll go ahead and update the Android app first and then get around to iOS later.