By now everybody knows of the shenanigans taking place with GME and several other stocks.  I thought I’d document some of my process in profiting from its parabolic rise (and subsequent fall).  As you may know, I created a Parabolic Rise stock scan to find situations just like this.

GME first popped up on the scan on January 13th and it’s still up over 500% from that point!  Sadly, I can’t say that I bought it then.  Going long parabolic moves doesn’t sit well with me -- I actually wrote the scan to find short candidates.

Here’s the chart showing that day: 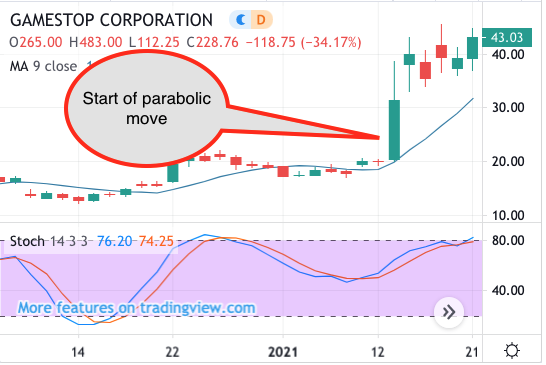 I had to scroll the more recent days off the page so you could see just how strong that move was.  It looks like nothing on the current chart:

And here’s the chart with the Bollinger Bands.  Flying so far above the upper Bollinger Band makes me feel much better about the chances for mean reversion being imminent: 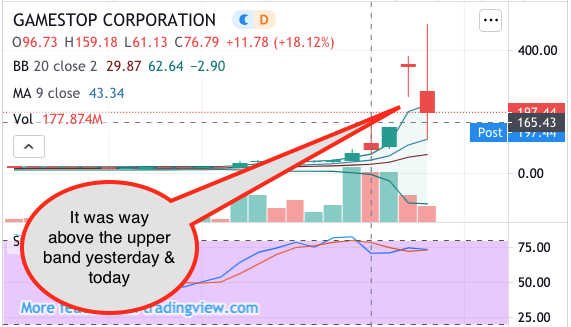 Here are a couple of reasons I usually don’t like going long stocks which have gone parabolic:

I’ll typically see if I can figure out why a parabolic move is happening and then, if I think it’s a bogus move, look for a spot to short it.  Over the years, after getting caught in some short squeezes I’ve learned some lessons about going after movers like this:

On the 13th, I added GME to my "potential shorts" watchlist and I’ve been stalking it ever since.  It made a massive (bearish) shooting star-like candlestick on the 25th.  That really got my attention but then I also started hearing about how a Reddit / WallSttreetBets mob was trying to force some hedge funds out of their GME short positions.  I also follow Citron, one of the main targets, on Twitter & I’d seen them/him screaming bloody murder. :-)

When GME almost negated that shooting star the next day I knew things were gonna get really interesting.  Then the next morning (yesterday) I saw that it was up about 100% in pre-market trading partially thanks to Elon Musk tweeting about it.  Now I’m salivating to get short!  Then I saw the GME short squeeze got mentioned on one of the mainstream media moving shows.  That made me think: “OK, we’re close to the end”.  Here’s my tweet from yesterday morning:

So the $GME madness has made it to the mainstream media morning shows. This *must* be the end of the party -- right??? 🤔🤷🏾‍♂️ Feels like the old Barron's or Sports Illustrated magazine cover curses. pic.twitter.com/893GkQgzVw

I was still a bit cautious about shorting GME because I knew the story was going viral and “They can rise much higher than I think they can” was in the front of my mind. So I thought “is there another way I can effectively short GME?” That led me to check for ETFs holding GME shares.  So I went over the the GME page and clicked the “ETFs Holding GME” button.

Of the ETFs listed there, XRT stood out because the chart made it clear that GME was having a big effect on it.  It was well above its upper Bollinger Band, so I figured I could use a retracement to the upper band as a first target.  I also liked the liquidity of XRT vs. the other ETFs with GME exposure.  Finally, XRT had enough volatility to make it worth taking a trade but not enough that I was worried about getting slaughtered if I held it overnight.

So at 9:41 I decided to short 200 shares of XRT at 87.80.  The GME story *really* made the rounds during the day.  I started getting questions about it from friends who don’t follow the market and even people overseas.  That actually made me more confident that we were close to the end.  Meanwhile, XRT just chopped around all day and closed at 91.49.  I was down a bit but I wasn’t very concerned.

Not long after that I started seeing headlines about Robinhood and Interactive Brokers restricting GME trades to “liquidation only” — something I don’t recall seeing in my ~25 years of trading.

I’d lucked up and gotten off my short right before my broker, Interactive Brokers, stopped allowing new GME positions.  IB also increased their borrow fee on GME to 300%, so I knew I would not carry the position overnight! Now I figured I just had to sit & wait for the bottom to fall out.  That was easier said than done.  GME traded like a bucking bronco.  It would drop like a stone, get halted, rally hard once resumed, get halted, drop, chop, get halted…. 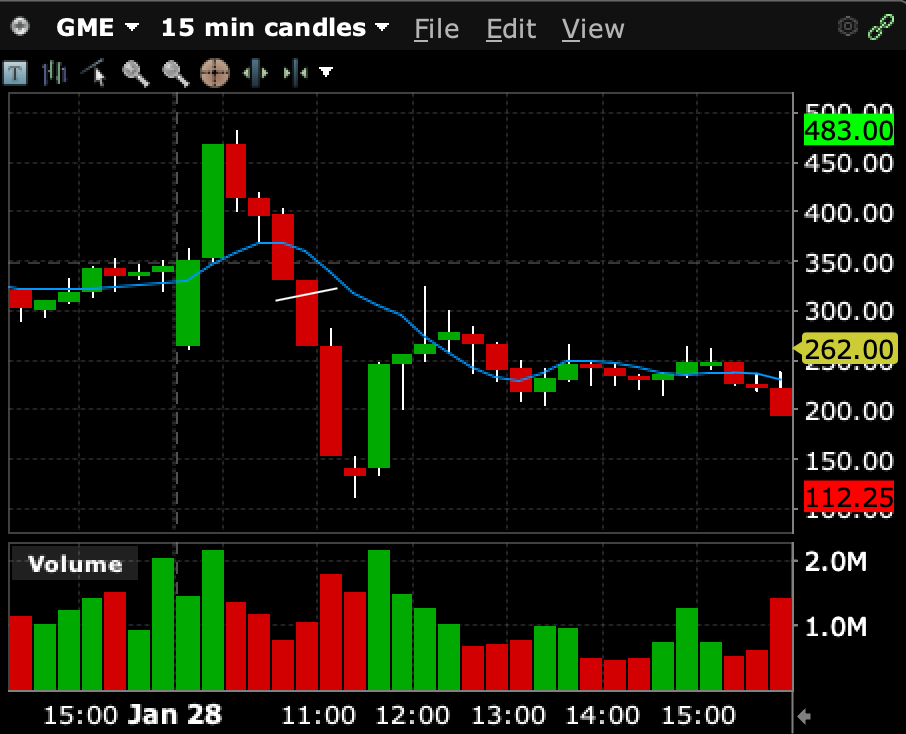 GME must have been halted 20 times today!  And that is another reason I don’t like to trade parabolic movers — I know they can get halted and I generally want no parts of trading halts.  Sometimes they’ll even halt stocks for days or weeks.

Once GME really started falling, I tried unsuccessfully to cover my short.  After it cracked 200 it was cascading down but it kept getting halted before my orders would fill.  It slid all the way to 112 but I still couldn't  get a fill.  Thankfully I decided to cover XRT around that time & was able to buy those shares back for 78.54.  I finally got a fill on GME at $247 at 11:45 for a 46% gain. Not bad for 4 hours of work.